Dabbling in Data
This unit was developed for Year 5 students to examine the way that computers use whole numbers to represent data.
As most students were completely unfamiliar with the binary number system, our first few lessons were designed to provide hands-on opportunities to explore this concept. Once they had developed a basic understanding of binary numbers and had looked at how the ASCII code could be used to represent letters and numbers as bytes, the students used their iPads to create a short presentation explaining what they had learned.
The second phase of the learning was to extend on the idea of binary being a simple “on-off” code through an activity involving Scratch programming and the use of Makey-Makey kits.
To finish off our study, the students apply their knowledge to create a simple user interface for a game that works with on-off commands and share this game with their Prep buddies.

​Binary Dot Cards
Of all the activities we used with our Year 5 students to develop their understanding of binary numbers, this activity was the most successful. The audible expressions of delight as the concept "clicked" with different students around the room made this lesson one of those teaching moments I will never forget.
The students worked with a partner using a set of five cards with dots on one side (1, 2, 4, 8, 16). The cards were arranged face down with the "one" card on the far right. When all cards are face down, the number of visible dots is 0, and this was recorded by students on a piece of paper as 0 = 00000. The cards are turned over and back in turn to create the numbers from 1-31, and the numbers were recorded as they went, in both decimal and binary systems.
As the students worked in pairs, one student concentrated on the cards and the other was recording the sequence, but there was a lot of discussion about patterns they were noticing as they went.
The dot cards were used in subsequent lessons as a warm up and review, with students developing some fluency at using the cards to represent numbers.
Students who were quickly able to use the dots cards to represent the numbers to 31 were able to extend the written pattern further by adding another place.
Video resources
The students enjoyed watching some short videos that explained the binary system in different ways. The visual aids helped some children to grasp the concept more easily, and having access to the videos allowed students to view the video more than once if they were still not understanding the binary number system.
The first video, What are Binary Numbers, with James May, was well received by the students as it was quite humorous. The visual representation of both the decimal and binary systems were useful to most students. A few of the jokes went over the students' heads, but they particularly liked the joke about the two types of people, which become more relevant to them as their understanding grew.
The second video, Binary Numbers and Base Systems Explained as Fast as Possible, compares the decimal and binary numbers in reasonably simple terms, although the speaker is quite fast. Students only need to watch the first part of the video. After 3:50, the video is an advertisement for online tutorials.
CISCO Binary Game
​The CISCO Binary game is an arcade-style game that was useful for students to develop speed and accuracy in representing binary numbers.  Binary numbers appear in blocks in horizontal rows across the screen, with a decimal number to the right. Students must change the binary blocks to match the decimal number, or enter the decimal number using a keypad to match the binary number. As each correct answer is entered, the row clears. As more rows appear and the game play speeds up, it becomes more challenging. If the screen becomes full, the player must start again.
As a further challenge, the players were asked to record their high scores in binary and compare them to see who was fastest in the class.
Rick Regan provides other ideas for teaching children about binary numbers in this blog post: How I Taught Third Graders Binary Numbers.

Activities to explore how computers use binary numbers to represent data:

Bits and Bytes
The students were familiar with the term "bytes" as they had heard and used terms such as megabytes and gigabytes and knew that this was something to do with how "big" or "powerful" computers were, and knew that people needed gigabytes on their phones.
To unravel the mystery of this language and to connect this everyday talk to what they had been learning about binary numbers, it was necessary to define for them the terms "bit" and "byte".
ASCII Code
Once the students had a basic awareness of binary numbers, we examined how this was related to computers and data representation.
I reiterated that computers can really only tell the difference between two states: on and off, and explained that computers recognise patterns in sequences of switches. and can relate these to letters, numbers and other symbols by using the ASCII system.
I created this table that shows some of the ASCII characters. I arranged them purposefully to make some of the patterns in the binary representations more obvious to the students.
​Students were given small strips of paper with sequences of 8 boxes and asked to choose two colours - one for on/1 and one for off/0. They selected a character and coloured the boxes to match the binary.
ASCII Binary Boxes - to print 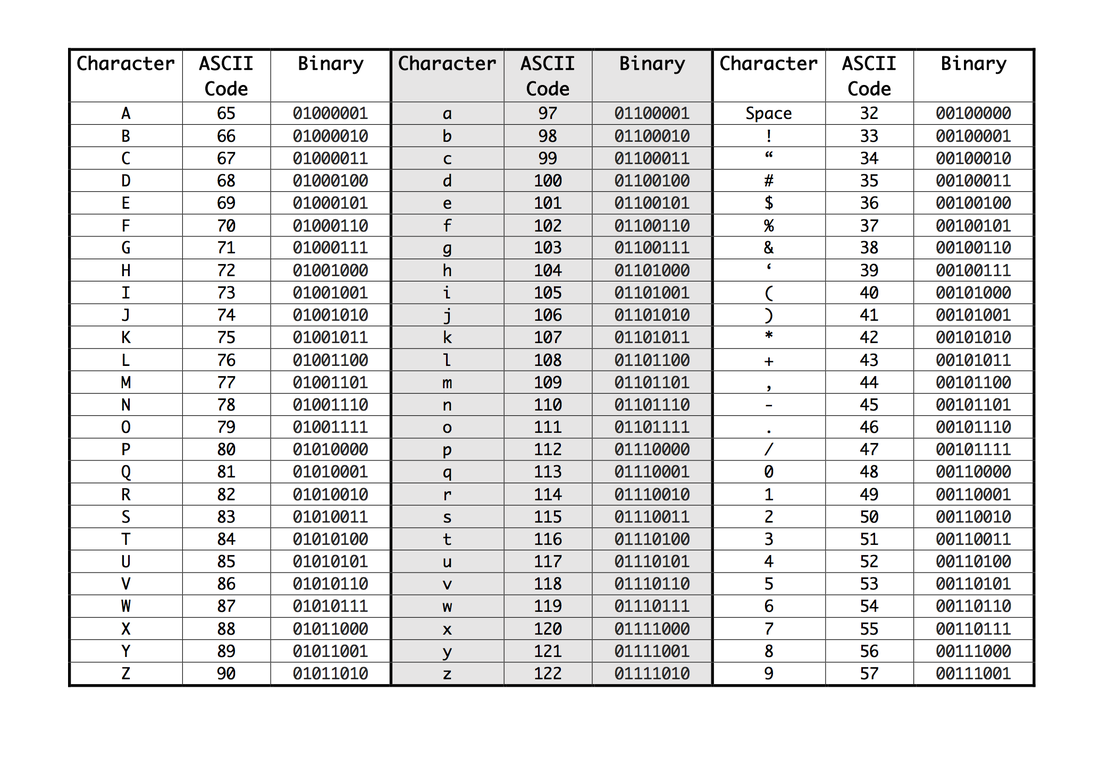 Binary Bracelets
This unplugged activity came from the Code.org website. Students use a pipe cleaner and beads to represent one or more characters using a binary system to show the ASCII number. Students could create their initials or a short word or emoticon using the beads and pipe cleaners. The activity was enjoyed by all students but was a particular favourite for the girls.
Binary Assessment
To assess student understanding of the binary numbers and how these are used by computers for storing data, the students made short video presentations about what they had learnt. 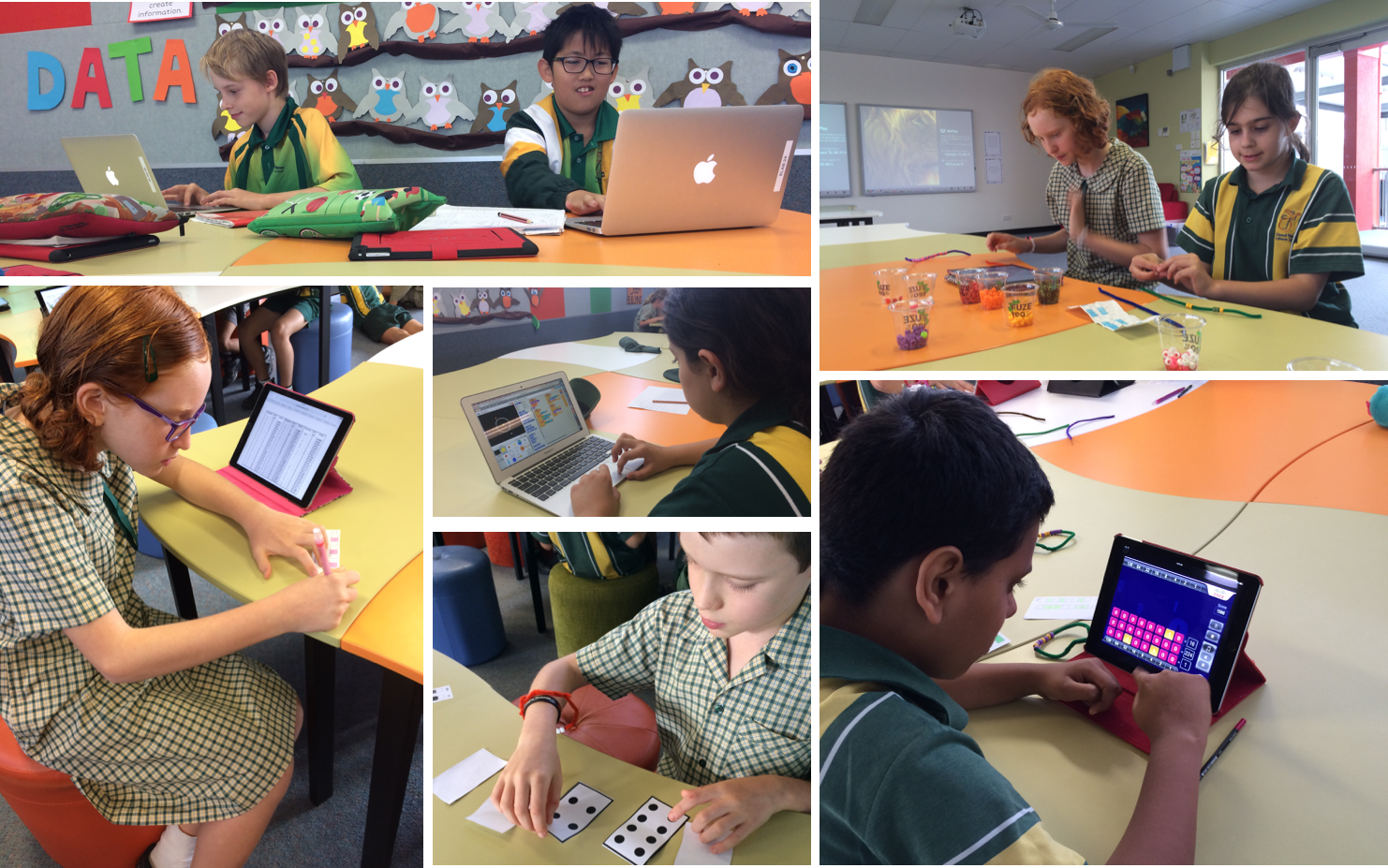 These activities allow students to further explore binary ON/OFF concepts by creating digital solutions. Students have the opportunity to work with the following content from the Australian Curriculum: Digital Technologies through these activities:

Design a user interface for a digital system (ACTDIP018)

Binary Switches
The students were given the opportunity to witness a practical application of an on/off binary switch using a pre-designed Scratch template available from MaKey MaKey. There are two variations of code available. The first is a single red dot that moves when the "switch" is set to ON and turns/rotates when the "switch" is OFF. The second code is similar, but has four different coloured dots that move simultaneously but in different directions, creating patterns. In this version, pressing the "a" key (or activating the corresponding MaKey MaKey key) will clone the dot. Students can investigate the code to determine how it works and innovate on the code if they wish.
The students then build a "binary switch" with an ON and OFF state, using a MaKey MaKey kit.
Create a Scratch Game with a Binary switch
Working in small groups, students were asked to create a simple Scratch game, or remix an existing game that involved an ON/OFF switch that would be suitable for their Prep Buddies to play. They designed an engaging user interface using a MaKey MaKey kit for game play.