Coding a Picture
This activity comes from the Digital Technologies Hub lesson: Using binary to create on/off pictures
In this unplugged activity, students work with a partner to create a design using black and white tiles on a 5 x 5 grid. They are then challenged to create a "code" for their design that could be interpreted by someone who could not see their design. They were instructed not to use words or images to communicate their design. Each student was encouraged to create their code independently.
Our students used their iPads to create their code using any app of their choosing. Some students used the camera app to photograph their code written on paper, while others created the code using Pages, Notes or Drawing Pad, then saved their code as an image. The students used AirDrop to send their image to another student sitting in a different part of the room for them to interpret the code.
The class discussed different solutions, and considered what this had to do with the way in which computers store images. Many of the students had developed a solution using binary numbers, as they had been exposed to this concept in Year 5, but there was a variety of creative solutions across the class.
Printable 5x5 Design Mat
Digital Images
There are several websites that provide basic explanations about how computers store digital images.
BBC Bitesize provides a colourful, illustrated explanation with short bites of text and some interactive elements. This page defines terms such as "pixels" and "bitmap" in student friendly language.
The Sketch Nation Create website provides some lesson plan ideas for using their app to explore concepts about digital images in the context of video game graphics. While the explanation on this page is provided for teachers, much of it it is clear enough for students to comprehend.
I created a short quiz based on these two websites to gauge the students' understanding of these concepts after they had visited the websites.
Sketch Nation Create
Sketch Nation Create is a free app which allows students to quickly create their own simple games without coding. Their website provides some excellent suggestions for using this app to create games in many subject areas, such as to practise maths facts and for storytelling in English.
We used Sketch Nation Create to design simple retro-style games using the 8-bit graphic option. Through this creative and enjoyable experience, students reflected on how computer graphics have evolved over time as technology has improved.
Introducing the CodeBug
Students were introduced to the cute little "wearable" CodeBug. This small, programmable device has a number of input and output ports, enabling it to be used for a variety of applications, but for this unit, the students were focussed on using the 5 x 5 grid LED display to showcase their designs.
We purchased 3 CodeBugs for around $30 each for demonstration purposes, but as the coding software is available online, all students could work on their designs and test their coding simultaneously using their iPads.
To introduce the coding aspect, the students used the Blocky coding tool to copy the code displayed below. They ran the code and then studied it to work out what was happening. They then innovated on this code to test their theories. Students were guided to consider how this related to binary numbers, and the way in which binary code could be used to represent an image on a 5 x 5 grid. 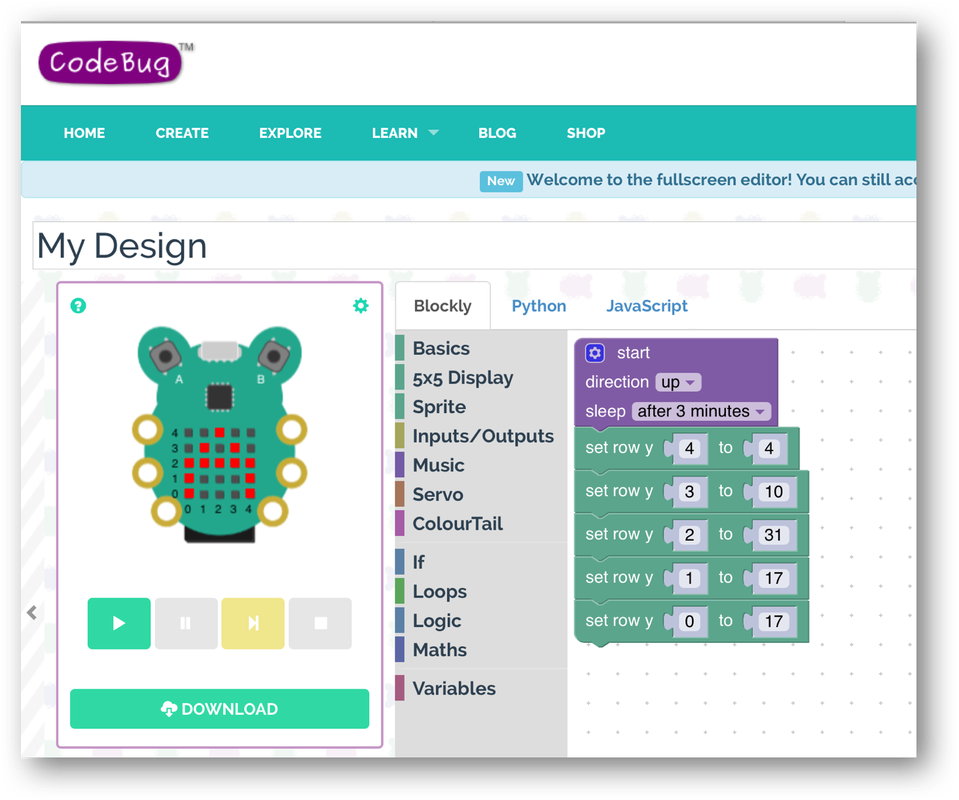 CISCO Binary Game
​To review their understanding of the binary number system, students had the opportunity to engage with the CISCO Binary Game. They were also encouraged to review some of the videos that they had watched the previous year in the Bits of Binary unit.
The CISCO Binary Game is an arcade-style game that was useful for students to develop speed and accuracy in representing binary numbers.  Binary numbers appear in blocks in horizontal rows across the screen, with a decimal number to the right. Students must change the binary blocks to match the decimal number, or enter the decimal number using a keypad to match the binary number. As each correct answer is entered, the row clears. As more rows appear and the game play speeds up, it becomes more challenging. If the screen becomes full, the player must start again.
Code-Your-Own Design
The students were given the opportunity to create their own design on a 5x5 grid that they would later code for the CodeBug. They could plan their design on their iPad using a painting app such as Drawing Pad, or use the paper tiles and design mat. They used the PDF worksheet to record their chosen design and to work out the binary and decimal representations of the design. Their next task was to use the CodeBug website to create the code for their own design, and then to run it on the CodeBug.
Code-Your-Own Design worksheet PDF
Extending the Design Challenge
Students requiring extra challenge were encouraged to consider how they might create an animated design, rather than a static design. Their animation could be a flashing design, or a scrolling design, such as the kind seen on some digital displays.
Reflecting on Learning
After exploring how the CodeBug was able to use the binary system to display images, the students created a brief explanation with images of their design to show their understanding of how computers can use whole numbers to store images.